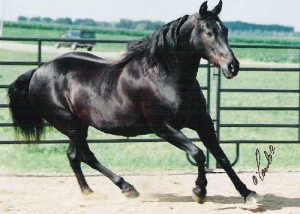 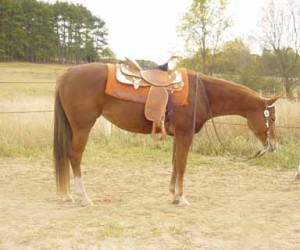 Maime passed away the summer of 2017 due to complications from chronic laminitis.  She was the sweetest broodmare ever and will be greatly missed. 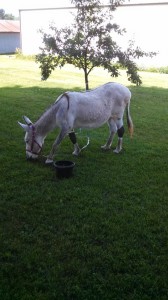 Ernie also known as the “Church donkey” spent several years entertaining several folks at live nativity scenes. All i know for sure is I remember to visit him at Christmas time as a child. Documentation showed him well over 20 years old. He came to live with us about 13 years ago  and lived a life of leisure and pampering. He was euthanized in November 2013 due to complications of lamenitis. RIP our Dear Friend. 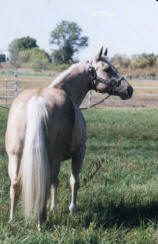 We called the vet out and he tubed her and said she should be fine.  Well, she got worse the vet was summoned again.  Tubed again the vet didn’t give much hope for her as she thought she felt something upon a rectal exam but I had to try and see if Alice could fight it.  The next morning looking at Alice she told me she couldn’t and being 23 years old she was not a surgical candidate. The vet was summoned 1 more time and my ole girl was put out of her misery.  We miss you Alice!

This poor mini Donkey could barely walk when we got him.  We could tell someone had just chopped off his toes to make his poor feet look better  and he had the number 33 shaved into his side so when he came thru the auction block and they said his name was 33 I couldn’t hold myself back.  Droopy came home with us that day!

It didn’t take us long to give him a name.  His left ear must have been broken or froze at one time and the tip drooped so that is how he got his name Droopy.  Within a year with corrective trimming and proper nutrition this guy was running again and kicking up his heals.  We had no idea how old he was. The vets figured 50ish…. One thing for sure is he lived his life out Happy.  We had the Pro photographer out and how could we not take a picture of Richard and his Donkey! 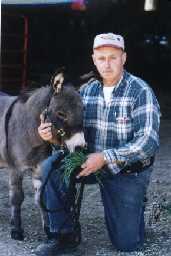 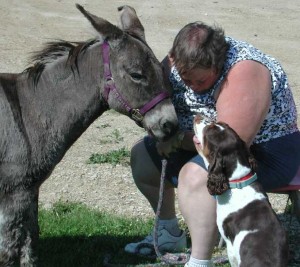 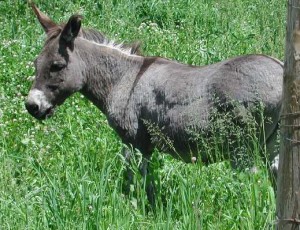 Every year since I bought Droopy I clipped him in the spring.  He never shed out. On June 3, 2006 I gave him his yearly clip and iodine bath that follows and I sat out on the lawn with him while he dried.  Jenni snapped a photo of Droopy, I and Breezy so had to add that too. 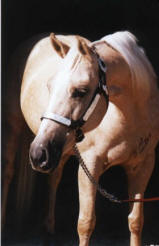 Silver Dee Candy left us abruptly in 2005 after complications of Colic surgery.  She left behind an orphan filly that is making us all proud Ultima Starshine Candy among many other gorgeous children.

Ultima Playboy left us abruptly in August of 2006 after complications of vasiculitis (Major swelling in the vessels in his head).  He was in the Prime of his life also and making such a wonderful name for himself. He has left behind some wonderful children that are truly winners and will be all they can be.  He was what we were breeding for at the FourB a beautiful horse that could do it all and was doing it all when he was taken from us and ohh so young.

Although with us only a very short time.  Ulti was loved by his Gorgeous Mama Goldie and all the human friends he had.  He was born April of 2006 with his tongue hanging out and we tried everything to save this little guy.  He had a complete blood transfusion and was doing real well thanks to Linda’s determination and Goldie’s cooperation in being tube fed that first 24 hours of life.  He had learned to suck and was doing great.  Well, he passed away at 2 weeks old. He got ill real fast.  The vet was summoned and his blood cells had sky rocketed.  He was too weak to fight whatever the infection was and in the wee hours of the morning we called the vet out and really before she injected him he had already crossed the rainbow bridge.  He is now Romping with his Daddy up there with no pain and forever at peace.

On April 20, 2007 a gorgeous Golden Dun Filly was born. Our last by Playboy.  Everything was textbook.  But, only god knows why this filly FourB Ultima Finale “Allie” became septic and it settled into her left front knee joint.  She spent over a week at the Hospital and then 3 weeks here on double daily meds doing great except the knee kept getting worse.  Her good leg then started to bow and we had a final x-ray taken and that even showed that the infection had went to the bone.  We could not let her suffer anymore.  Allie was put out of her misery on May 29th,07.  Rest in Peace our Beautiful Ultima Final!